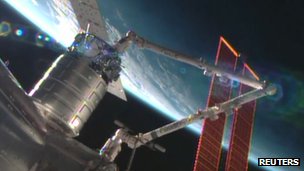 US space agency Nasa is planning to launch a 3D printer into space next year to help astronauts manufacture spare parts and tools in zero gravity.
It will be the first time a 3D printer has been used in space and could help reduce the costs of future missions.
The device will have to withstand lift-off vibrations and operate safely in an enclosed space station environment.
Nasa has chosen technology start-up Made in Space to make the microwave oven-sized printer.
"Imagine an astronaut needing to make a life-or-death repair on the International Space Station," said Aaron Kemmer, the company's chief executive.
"Rather than hoping that the necessary parts and tools are on the station already, what if the parts could be 3D printed when they needed them?"
In 1970, Apollo 13 astronauts had to cobble together a home-made carbon dioxide filter using a plastic bag, a manual cover and gaffer tape. 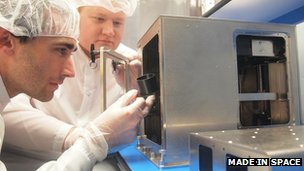 Made in Space scientists work on the 3D printer prototype
A 3D printer might have solved the problem in minutes.
"If you want to be adaptable, you have to be able to design and manufacture on the fly, and that's where 3D printing in space comes in,'' said Dave Korsmeyer, director of engineering at Nasa's Ames Research Center.
Nasa is also experimenting with 3D printing small satellites that could be launched from the International Space Station and then transmit data to earth.
Additive manufacturing, as 3D printing is also known, builds up objects layer by layer, commonly using polymer materials.
But laser-melted titanium and nickel-chromium powders are now being used to build much stronger components.
In August, Nasa successfully tested a metal 3D printed rocket component as part of its drive to reduce the costs of space exploration.
Posted by Stephen Skelton at 4:02 PM