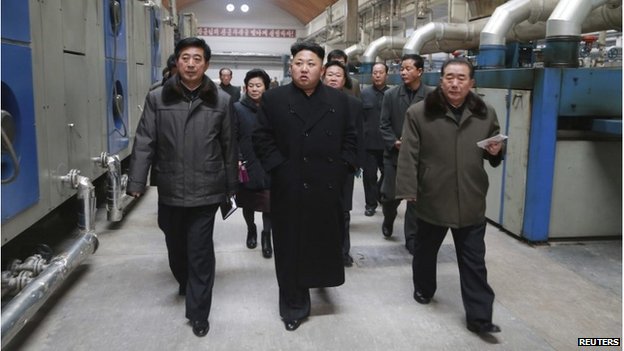 North Korea has been suffering severe internet outages, with one analyst saying the country's access to the web was entirely cut.
The disruption comes days after the US accused North Korea of being behind a cyber-attack on Sony Pictures.
US President Barack Obama had promised a "proportional" response, though officials would not comment on any US involvement in the current outages.
Analysts said technical problems or a cyber-attack could be to blame.
"For the past 24 hours North Korea's connectivity to the outside world has been progressively getting degraded to the point now that they are totally offline," said Doug Madory of internet analysis company Dyn Research.
Arbor Networks, an internet technology service, said it had detected denial-of-service attacks against North Korea's infrastructure beginning on Saturday.
Only a small proportion of people have access to the internet in North Korea, one of the world's most secretive countries.
Film pulled

Last week, the US government said an FBI investigation had shown that North Korea was behind a hacking attack on Sony, which led to unreleased films and private emails being leaked online. North Korea denied being responsible.
But North Korea also praised the attack on Sony, and had for months condemned a Sony comedy, The Interview, which depicts the assassination of the North Korean leader. Sony eventually cancelled the cinema release of the film.
Mr Obama had said that the US would respond to the attack on Sony "in a place and time and manner that we choose".
On Monday, state department spokeswoman Marie Harf said the US would not discuss publicly "operational details about the possible response options, or comment on those kind of reports in any way, except to say that as we implement our responses, some will be seen, some may not be seen''.
The internet disruption came as the UN Security Council discussed North Korea's human rights for the first time, despite opposition from China and Russia.
US ambassador to the UN Samantha Power dismissed North Korea's demand to launch a joint investigation with the US into the attack on Sony, and threats to retaliate if the US refused.
"It is exactly the kind of behaviour we have come to expect from a regime that threatened to take 'merciless countermeasures' against the US over a Hollywood comedy, and has no qualms about holding tens of thousands of people in harrowing gulags," she said.
North Korean diplomat Kim Song said a decision on how to respond to the Security Council's move would be made in Pyongyang. "We totally reject the decision to bring DPRK [North Korea's] human rights record to the UN Security Council," he told Reuters.
Posted by Stephen Skelton at 6:12 PM