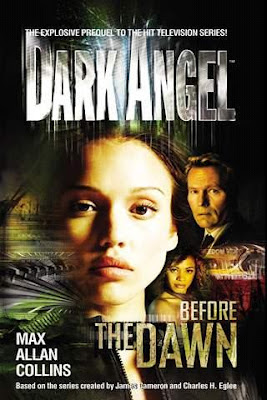 Never-before-told tales of action and adventure
revealing the early days of Dark Angel!
Los Angeles, 2019. Large sections of Tinseltown are in Richter-scale ruins in the aftermath of the Pulse and a devastating earthquake. Surviving among a ragtag pack of street kids, agile as a cat, and an expert thief, Max steals from the rich and gives to Moody, her mentor in crime and leader of the gang. But with no real family to speak of, Max longs for her missing “brothers and sisters” from Manticore, the covert agency with a sinister history of militaristic manipulation and control.

By chance, Max sees a news story on TV about a dissident cyberjournalist in Seattle, known to everyone as “Eyes Only.” The police are searching for his accomplice, a young rebel whose image flashes on the screen. Max immediately recognizes Seth, one of her Manticore siblings. She mounts her motorcycle and hightails it north. What she rides into is an elaborate web of betrayal, greed, revenge, and selfless heroism that will only further fuel her quest to uncover the secrets of her past—and seize hope for the future. . . .

He scripted the internationally syndicated comic strip Dick Tracy from 1977 to 1993 and has written the Batman comic book and newspaper strip. His graphic novel, Road to Perdition, has been made into a DreamWorks feature film starring Tom Hanks and Paul Newman, directed by Sam Mendes.

Collins lives in Muscatine, Iowa, with his wife, writer Barbara Collins, and their teenage son, Nathan.
Posted by Stephen Skelton at 3:54 AM