The Dark Monk - A Hangman's Daughter Tale - Amazon Kindle No. 1 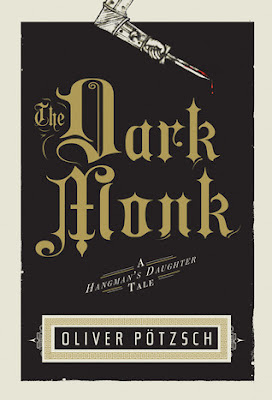 Publication Date: June 12, 2012
THE ANTICIPATED FOLLOW-UP TO INTERNATIONAL BEST SELLER THE HANGMAN’S DAUGHTER
1660: Winter has settled thick over a sleepy village in the Bavarian Alps, ensuring every farmer and servant is indoors on the night a parish priest discovers he's been poisoned. As numbness creeps up his body, he summons the last of his strength to scratch a cryptic sign in the frost.
Following a trail of riddles, hangman Jakob Kuisl; his headstrong daughter, Magdalena; and the town physician’s son team up with the priest’s aristocratic sister to investigate. What they uncover will lead them back to the Crusades, unlocking a troubled history of internal church politics and sending them on a chase for a treasure of the Knights Templar.
But they’re not the only ones after the legendary fortune. A team of dangerous and mysterious monks is always close behind, tracking their every move, speaking Latin in the shadows, giving off a strange, intoxicating scent. And to throw the hangman off their trail, they have ensured he is tasked with capturing a band of thieves roving the countryside attacking solitary travelers and spreading panic.
Delivering on the promise of his international best seller The Hangman’s Daughter, Oliver Pötzsch takes us on a whirlwind tour--once again based on prodigious historical research into his own family tree--through the occult hiding places of Bavaria’s ancient monasteries, bringing to life an unforgettable hangman and his tenacious daughter, painting a robust tableau of 17th-century Bavaria as it navigates the lasting impacts of war, and quickening our pulses with a gripping, mesmerizing mystery.

The brutality and ignorance of 17th-century Bavaria serves as the backdrop for Pötzsch's thrilling second whodunit featuring an unlikely trio of sleuths (after 2011's The Hangman's Daughter). When the parish priest, Andreas Koppmeyer, eats some poisoned doughnuts after sealing up a mysterious something in his church basement, he manages to scratch a mark on the frost covering a gravestone as he expires. Figuring out what that dying clue means and who doctored the pastries falls to Altenstadt hangman Jakob Kuisl; his daughter, Magdalena, an apprentice midwife; and her suitor, Simon Fronwieser, a doctor's son. Fronwieser links a Latin phrase seen in a crypt with the Templars, raising the possibility that Koppmeyer stumbled on a secret relating to that shadowy society. Meanwhile, the depredations of a gang of robbers threaten local commerce. Fans of Michael Gregorio's early 19th-century Prussian series (Unholy Awakening, etc.) will find a lot to enjoy.

Originally published in Germany in 2009, this sequel to The Hangman’s Daughter begins in January 1660 with the murder of a priest and takes readers on a wild adventure to uncover the secret of a long-hidden (and possibly mythical) treasure of the Knights Templar. Potzsch does an excellent job of plunking the reader down in seventeenth-century Germany; Jakob Kuisl, the town hangman, and his daughter, Magdalena, don’t seem like made-up characters in a fictional landscape but, rather, like real people in a real place (in fact, the Kuisl family of executioners actually existed, and Potzsch is descended from them). The author supplies enough historical detail to give readers a good sense of the time and place but not too much to risk boring them with unnecessary details. Readers will also appreciate the nice balance between drama, suspense, and humor: this is a serious story, Potzsch seems to be saying, but it's OK to have some fun with it. At least two more books in the series are forthcoming, and they will be most welcome.


Posted by Stephen Skelton at 4:46 AM