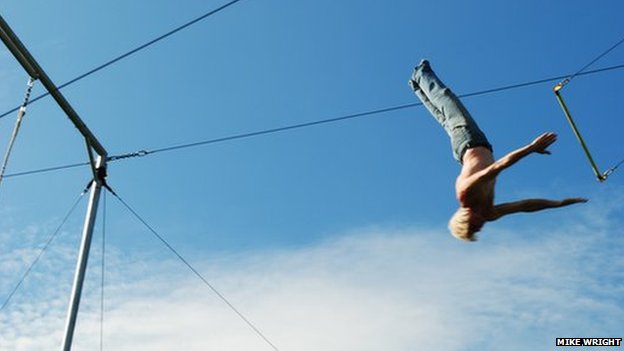 Trapeze artist Mike Wright has performed with circuses since the 1960s. Now, aged 67, he believes his career - and a new play he is to perform in - will demonstrate that age is just a "state of mind".
As a boy growing up in the 1950s in Zambia, Mike always knew he never wanted to "sit behind a desk".
Now, after a long career that has seen him perform all over the world, he's approaching 70 and has no thoughts of retirement.
"People don't choose to be performers - it's a compulsion," he says. "I won't quit until my body says quit."
"We all lose flexibility as we get older, but with age comes knowledge.
"You are impatient when you are young, because you want to get on and do it, and impatient when you are older because you feel time is slipping away.
"I don't know if you ever change." 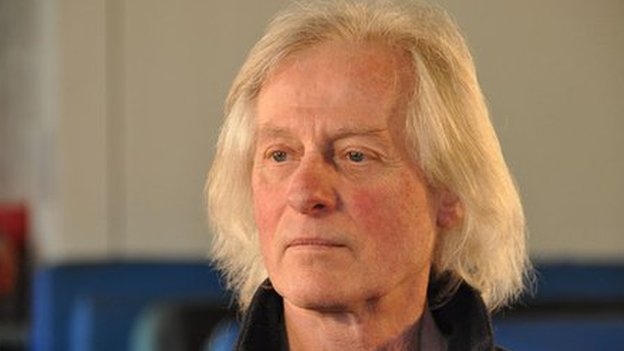 Mike Wright said he knew at 14 he didn't want to "sit behind a desk"
Despite his positive attitude, Mike is aware that his body is slowing and losing its elasticity while tissue damage takes longer to heal.
Continue reading the main story

Mike Wright
But he does not see this as a barrier to continue his physically demanding job.
Last year he performed at Glastonbury Festival and in January he performed at a 70th birthday party in Karachi, Pakistan.
"We realise we are not so invincible and mentally we take a more detailed and cautious approach," he adds.
"I'm aware of my body and I am not ashamed of it but I am still surprised people want to look at an old wrinkly, when there are young and beautiful people around."
Mike now has four grandchildren and runs his own aerial performance company alongside a job training younger students starting their circus careers at Circomedia, in Bristol. 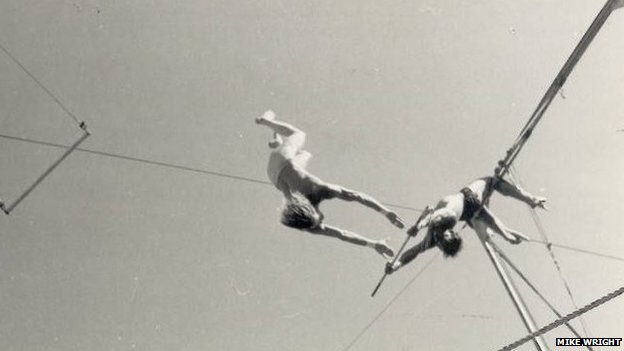 Mike Wright training in Cape Town in December 1968 when he was 21
He has now been cast in a stage production about ageing, called "Once Upon A Time".
Continue reading the main story

Recruiting for a show like this is a fairly unique challenge”

Luke EmeryTheatre producer
"The topic of ageing is very current within British society and yet little work has been done on exploring this in the theatre, particularly with ageing performers," says director Aga Blonska.
She said it was her step-father's 80th birthday which had inspired the idea for the production.
"Not to be too sentimental, but it was about realising the inevitability - about mortality and a sense of our own existence," she adds.
"You hear about old people starving, older people being lonely, being embarrassed about themselves - we perceive the word 'old' as negative. 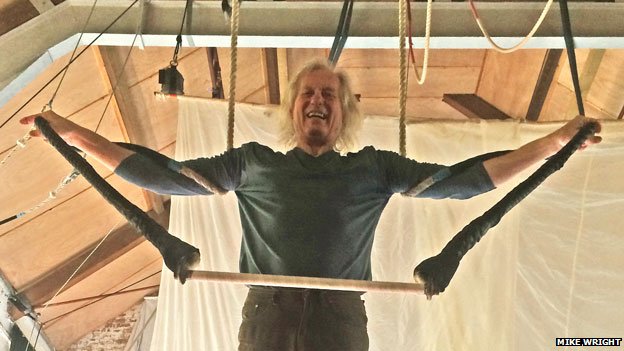 Mike Wright began his career as a classically trained ballet dancer
She says the show is not about "doing somersaults" but about the performers' "own stories and memories".
Mike's personal story will make up part of the show along with three other artists. He is the first to be cast and the challenge is to find more artists like him.
Finding people aged over 65 who worked professionally in circus and dance is proving difficult.
"Recruiting for a show like this is a fairly unique challenge," says the show's producer Luke Emery.
"We can't just use the normal routes of [actor's directory] Spotlight and social media as these aren't places that people of this age generally use."
Asking performers who are no longer young to display their older bodies could also be a reason, he adds.
For Mike, who trained as a classical ballet dancer before embarking on his long circus career, the play is an "interesting concept".
And it is another way to delay the day when - in his son's words - he gets a "proper job".

Posted by Stephen Skelton at 5:02 PM