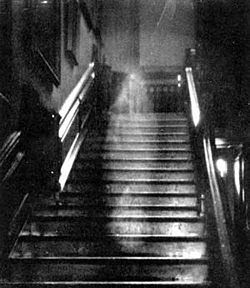 I was living in Dunedin, New Zealand at Royal Terrace when I was a student. One day I came home and my flatmate, who was cooking, told me I had a guest waiting outside my room (which was locked). I looked down the corridor from the kitchen and saw a tall dark man in a military uniform with a black hat and cloak. I called out to him “Wait!” but instead he turned and walked straight into my room. I didn’t know how that was possible with the door locked and so I raced in after him calling to my flatmate for help. When I got in to my room there was no one there, the window was locked and it was a two floor drop to the concrete below. My suspicions were aroused so I called the landlord. He told me I was the third person in one hundred years to report an identical incident involving the same person, the ghost of Royal Terrace. The student quarters I was living in, he told me, used to be a hospital, and the room I occupied, an operating theatre. The man in question, the ghost, had died on the operating table over one hundred years ago, and perfectly fit my description.

Posted by Stephen Skelton at 11:33 PM