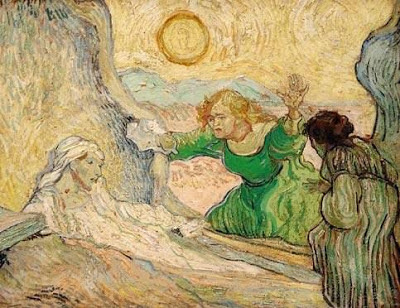 Raised from the Dead

Is resurrection possible?
Jesus thought so.
And my ancestor experienced it.

My ancestor was Rowland Hassall (1768-1820), preacher and landholder (born on 31 March 1768 at Coventry, England, the son of James Hassall.) He married Elizabeth Hancox, a silk weaver like himself, and a son Thomas was born in 1794.

Shortly after, he died of tuberculosis.He was in a coffin in the church and the Rev. George Burder was saying the last rites when the congregation heard a banging from inside the coffin on the coffin lid. They got carpenters who wrenched the lid open only to find Rowland sat straight up, in the coffin, and swore to the congregation that he had seen the light and had been saved by Jesus. It was a miracle.

Both he and his wife were 'called under one sermon' preached by Rev. George Burder, and became members of the West Orchard Congregational Church. Hassall founded a Sunday school and was one of the field preachers for whom Burder wrote his famous 'Village Sermons'. Burder, a director of the (London) Missionary Society, recommended Hassall as an artisan missionary for Tahiti. He described Hassall as 'a stout young man' with a 'rather bold' disposition who could read and write tolerably well but was 'rather illiterate than otherwise'. Hassall was accepted as a carpenter and the family sailed for Tahiti in the Duff in 1796. A second son born before they left England was named Samuel Otoo in honour of the Tahitian king.

The Hassalls then fled to Sydney in 1798, not liking the nudity and practices of the Tahitian natives where they started the first Sydney church in Parramatta in 1808.

Posted by Stephen Skelton at 9:50 PM