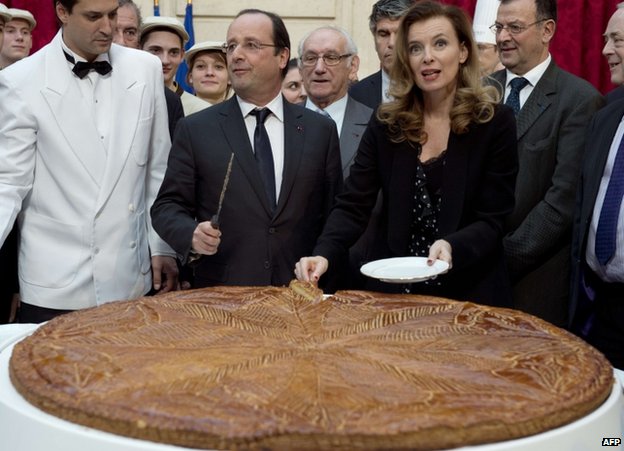 French First Lady Valerie Trierweiler has been admitted to hospital after media reports of an alleged affair involving President Francois Hollande.
She entered hospital on Friday "for rest and some tests", her office said, after Closer magazine published images linking him to actress Julie Gayet.
Mr Hollande did not deny the report but protested at invasion of his privacy.
Conservative opposition leader Jean-Francois Cope has suggested the drama has damaged France's image abroad.
Ms Trierweiler is expected to leave hospital on Monday, her office told AFP news agency.
A presidential news conference scheduled for Tuesday on plans to boost the flagging economy now looks like being overshadowed by Mr Hollande's private life, correspondents say.
Continue reading the main story

1988: They meet for the first time, she a journalist, he a Socialist Party MP
Family years: Trierweiler raises three children with her second husband, Denis Trierweiler, while Hollande raises four with his unmarried partner, Segolene Royal
November 2007: Trierweiler announces in an interview that she is Hollande's new partner, six months after he leaves Royal, who was defeated as the Socialist presidential candidate against Nicolas Sarkozy
May 2012: Trierweiler becomes First Lady of France with Hollande's victory over Sarkozy
June 2013: Trierweiler wins damages of 10,000 euros from the authors of a book entitled The Troublemaker, which made allegations about her private life before Hollande's election
January 2014: She is admitted to hospital after news of Hollande's alleged affair with an actress
Opinion polls already suggest he is the most unpopular president in a generation - one on Thursday indicated that only 25% of French people trusted him.
The French media face strict privacy laws but the tradition of secrecy over the private lives of public figures has been steadily eroded in recent years.
However, opinion polls suggest the French public appears to be averse to reporting politicians' private lives.
According to an Ifop-JDD poll published on Sunday, three out of four French people believe the alleged affair is a private matter for the president.
But with this dramatic twist affecting his official partner, it is increasingly hard to argue that these are personal matters which should not be under public scrutiny, says the BBC's Hugh Schofield in Paris.
Privacy debate
On Friday, Closer magazine printed a seven-page article about the alleged affair between Mr Hollande and Ms Gayet. 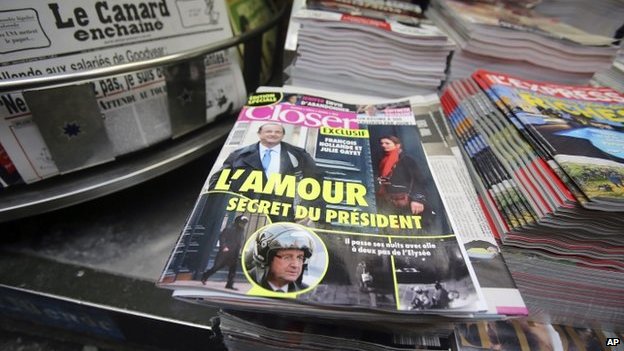 Copies of Closer magazine sold out on Friday
It was illustrated with photos showing a man said to be the president visiting a flat near the Elysee Palace at the same time as Ms Gayet.
The man said to be the president is wearing a helmet and is ferried to and from the building on a moped.
Mr Hollande threatened to sue over the report, which he called an "attack on the right to privacy", without denying the allegation.
Allegations of the affair are not new. Ms Gayet lodged a complaint in March last year after a report of the liaison appeared online.
In December, another actor, Stephane Guillon, teased her over Mr Hollande during a talk show to promote a new film.
The same month, L'Express magazine reported mounting concern among presidential staff over the president's frequent "escapades", without giving details.
Ms Trierweiler, who is a divorcee and mother of three children from an earlier marriage, is Mr Hollande's official partner and lives in a wing of the Elysee Palace.
Mr Hollande, who has never married, left his previous partner and mother of his own four children - fellow Socialist politician Segolene Royal - to be with her.
Mr Cope, leader of the centre-right UMP, said that while he was "very attached to respect for privacy", this recent incident was a "lesson in humility" for Mr Hollande.
"All of this is disastrous for the image of the presidential function," he said on national TV. "You only have to read the international headlines."
Posted by Stephen Skelton at 2:54 PM