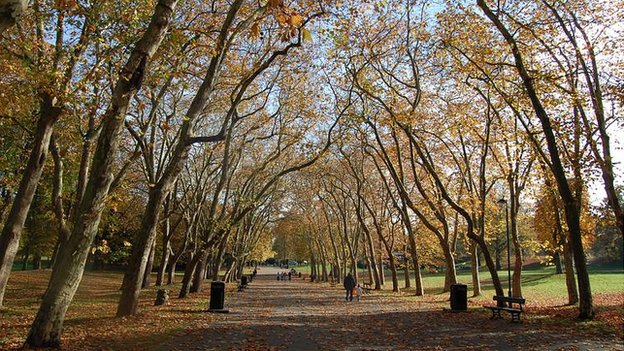 Living in an urban area with green spaces has a long-lasting positive impact on people's mental well-being, a study has suggested.
UK researchers found moving to a green space had a sustained positive effect, unlike pay rises or promotions, which only provided a short-term boost.
The authors said the results indicated that access to good quality urban parks was beneficial to public health.
The findings appear in the journal Environmental Science and Technology.
Green park
Co-author Mathew White, from the European Centre for Environment and Human Health at the University of Exeter, UK, explained the study built on the findings of a study that showed people living in greener urban areas were displaying fewer signs of depression or anxiety. 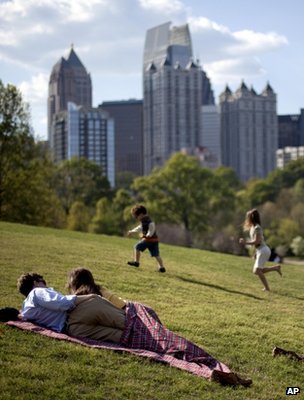 As cities grew, parks were areas set aside to preserve a sense of nature in urban landscapes
"But we did not know the time trajectory," he told BBC News.
"There could have been a number of reasons, for example people do all sorts of things to make them happier: they strive for promotion at work, pay rises, they even get married.
"But the trouble with all those things is that within six months to a year, they are back to their original baseline levels of well-being. So these things are not sustainable; they do not make us happy in the long-term.
"We found that within a group of lottery winners who had won more than £500,000 that the positive effect was definitely there but after six months to a year, they were back to the baseline."
Dr White said his team wanted to see whether living in greener urban areas had a lasting positive effect on people's sense of well-being or whether the effect also disappeared after a period of time.
To do this, the team used data from the British Household Panel Survey (now known as the Understanding Society survey), which began in 1991, and compiled by the University of Essex.
"It is a massive, representative sample of the UK population (currently about 40,000 households a year) and asks a load of questions, such as income, marital status etc," said Dr White.
"But it also includes something called the General Health Questionnaire, which is used by clinicians and doctors to diagnose depression and anxiety disorders."
Lasting effects
Explaining what the data revealed, he said: "What you see is that even after three years, mental health is still better which is unlike many of the other things that we think will make us happy."
Continue reading the main story 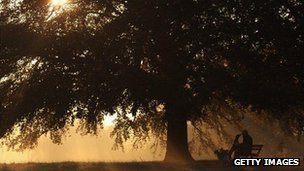 Campaigners fear cuts to budgets risk damaging the green spaces inherited from the Victorians
Dr White added that the team had submitted an application for funding to carry out further research that would examine marital relationships in different areas and to what extent things like divorce rates and satisfaction levels differed.
"There is evidence that people within an area with green spaces are less stressed and when you are less stressed you make more sensible decisions and you communicate better," he observed.
"I am not going to say it is the magic pill that cures all marriage problems, of course it is not, but it may be the [background factor] that helps tip the balance towards making more sensible decisions and having more adult conversations."
With a growing body of evidence establishing a link between urban green spaces and a positive impact on human well-being, Dr White said there was growing interest among public policy officials.
"But the trouble is who funds it," he said.
"For example, environmental officials will say that if it is good for people's health then surely shouldn't the health service be putting some money in.
"So a lot of people are interested but what we really need at a policy level is to decide where the money is going to come from to help support good quality local green spaces."

Posted by Stephen Skelton at 3:52 AM