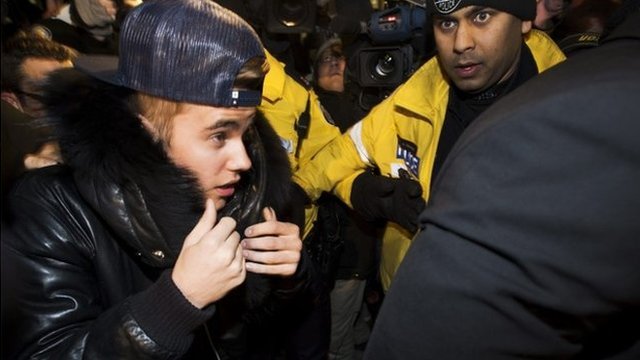 Canadian pop star Justin Bieber has surrendered to Toronto police to face charges he assaulted a limousine driver in December.
Mr Bieber, 19, was greeted at the station by a frenzy of television crews, news photographers - and screaming teenage fans.
He was booked less than a week after he was arrested in Florida and accused of drink-driving and other charges.
His management team have not responded to requests for comment.
On the evening of the alleged incident in Toronto, the Ontario-born pop star attended a Maple Leafs hockey game, Canadian broadcaster CBC reported.
Police officials say Mr Bieber will appear in court at a later date.
Also on Wednesday, a petition requesting Mr Bieber's expulsion from the US gained 100,000 signatures.
The petition was filed on a White House website by a member of the public.
The US president has no power to order an individual's deportation, and it is unclear whether the White House will respond to the petition.
Drink-driving arrest
In the early morning hours last Thursday, Mr Bieber was arrested in Miami Beach after a police officer pulled him over on suspicion of racing a hired yellow Lamborghini on a public street.
Police estimated he and a member of his entourage - who was also arrested - were driving at 55mph (88.5km/h) in a 30mph zone flanked by apartment buildings, a school, a youth centre and a golf course.
Suspecting he was intoxicated, the officer arrested him.
Mr Bieber was also charged with resisting arrest and driving on an expired licence.
After appearing in front of a Florida judge last week via teleconference, while wearing orange jail clothing and with his hands clasped in front of him, Mr Bieber posted bail of $2,500 (£1,500).
Mr Bieber waved to fans as he left jail.
Earlier in January, California police searched Mr Bieber's home for evidence after he allegedly threw eggs at his neighbour's home, causing thousands of dollars in damage.
The outcome of that search is still unclear but one of the singer's associates was arrested for alleged cocaine possession.
The singer's manager tweeted on Wednesday evening asking people "to be kind and hope for the best in people. not assume the worst. Thanks."
His management team said they expected to release a statement later on Wednesday.
Posted by Stephen Skelton at 5:59 PM